Ferrari has been hard at work on its latest flagship that would trump the LaFerrari for quite some time because it’s supposed to be the best yet. Now we’re finally privy to the most powerful, most advanced and fastest-accelerating road car out of Maranello; the SF90 Stradale.

It’s named after the scarlet team’s current Formula One machine, the SF90, and also pays tribute to the 90 years since Scuderia Ferrari came to be.

Ferrari’s own CEO; Louis Camilleri, describes the car as a “milestone in Ferrari’s history.” A lot of history is riding on the SF90 Stradale as it’s not only the newest flagship of the company but also the first series-production plug-in hybrid Ferrari. According to Louis, hypercar is the second of five new models to be launched in 2019. The SF90 Stradale sits on a newly developed platform that is a first series-production multi-material chassis for the outfit made from aluminium and carbon fibre. All that exotica means it weighs less than a LaFerrari by 15kg; weighing in at a dry kerb weight of 1570kg, and having the best power-to-weight ratio of any Ferrari road car.

Ferrari claims a 40 per cent increase in torsional rigidity that in turn leads to improved dynamic performance, reduced noise, vibration and harshness.

Rumours have been rife about the car’s purported 1,000hp output over the last few years and it hasn’t strayed much from the number. The petrol engine makes 986hp; 36hp more than the LaFerrari, and obviously more than any other road-going Prancing Horse to date. 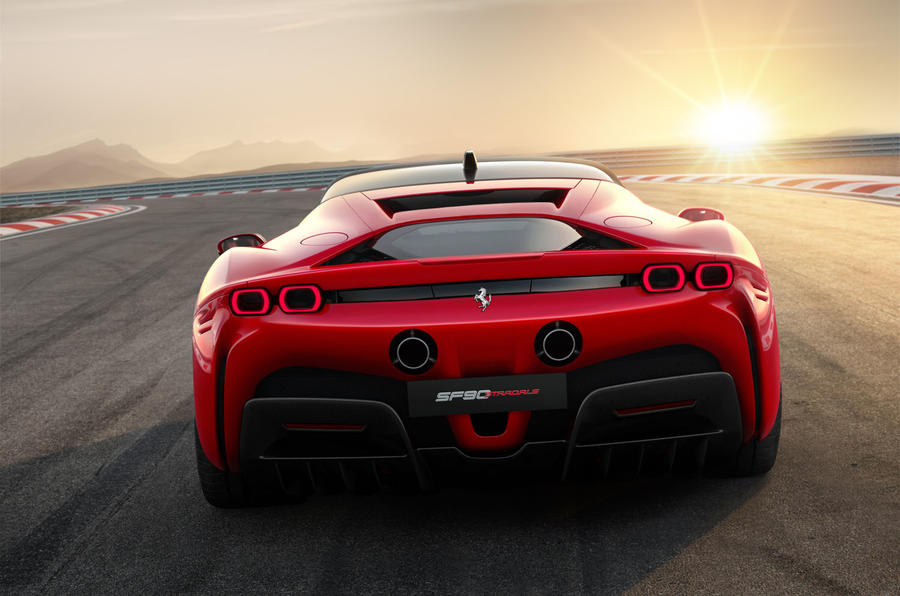 Central to all that is Ferrari’s award-winning narrow cylinder “F154” twin-turbo V8 found in the F8 Tributo. Here’ it’s been bored out from 3,902cc to 3,990cc. Of course, the engineers claim will sweat their mother’s lives on a complete redesign that comprises a new combustion, intake and exhaust system for mill that also includes a new 350-bar direct injection system.

It also incorporates a lower-mounted turbocharger and smaller flywheel that contributes to a lower centre of gravity. Inconel in the exhaust system instead of steel goes further to cut poundage.

Engine output alone is 769bhp and 800Nm of torque. It doesn’t stop there with a trip of electric motors with two driving the front and the third in the rear between the engine and transmission. That means all-wheel drive; something the LaFerrari made do without. Total horsepower is 986bhp. A small 7.9kWh lithium ion battery gives the car 25.7km of pure-electric range; something else the LaFerrari did without. Although a hybrid, the LaFerrari’s electric motor was purely to supplement the engine’s performance and hence, never had the ability to propel the car purely on electricity.

However, the SF90 Stradale can run on electricity up to 135kph, with the battery being able to be charged by plugging in or the engine’s braking. It goes without saying that performance figures will make Albert Einstein roll in his grave. The century mark is dispatched in 2.5-seconds, a new record for Ferrari. It can also do 0-200kph in just 6.7-seconds; or the time it took you to read this paragraph. 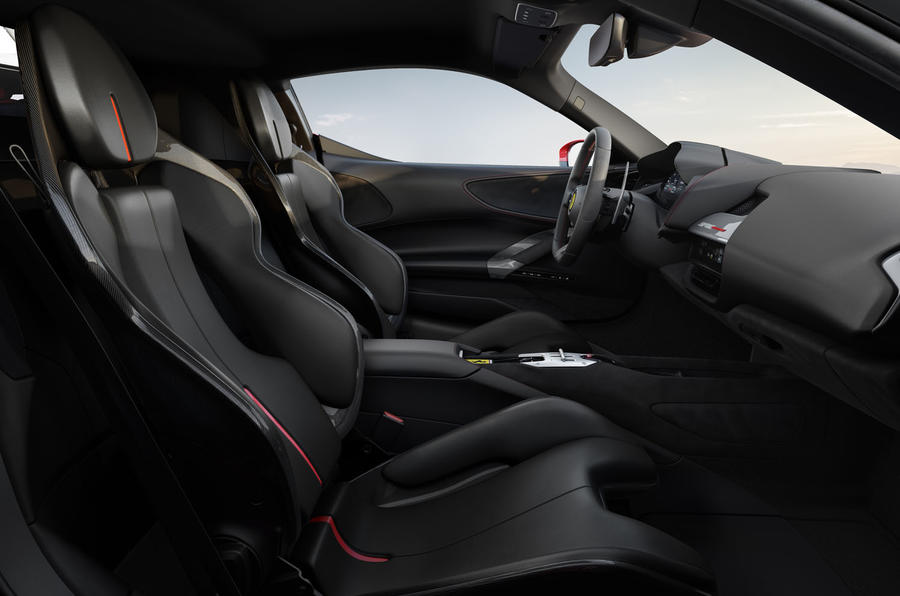 Coupled with a new torque vectoring system that balances the front electric motors with the rear hybrid setup, the combo allows “a whole series of solutions to boost the SF90 Stradale’s lap times, while simultaneously guaranteeing that drivers of all kinds could make full use of the car’s potential and have fun behind the wheel.”

Aerodynamics is the most important bit of cutting through the air for quick times. The SF90 is no different Ferrari’s director of design, Flavio Manzoni, calling its development a real back-breaker. The SF90 Stradale’s exterior provides optimum balance between style, heritage and against advanced aerodynamics.

You can have the SF90 in two aero setups; the standard or Assetto Fiorano package. The latter is a more hardcore take that sacrifices comfort better track pace with more downforce and an interior with lesser creature comforts. The result is 30kg dropped. Rubbers also get upgraded to the default maximum performance items of Michelin Cup 2 with a bespoke compound over the standard Pirelli P Zero. All in, Ferrari claims the SF90 is “the new benchmark for downforce and efficiency in high-performance road cars”. The numbers are 390kg of downforce generated at 250kph or 30kg more than the LaFerrari.

Even with all the weight reduction, Ferrari managed to integrate a push button door-opening system from the inside. A huge curved digital instrument cluster brings it into the future with all functions and infotainment controlled via the screen; or pretty much what Volvo has been doing for years. Ferrari’s put a lot of work into the steering wheel and swears that 80 per cent of the car’s functions can be controlled from it. Apparently, “eyes on the road, hands on the wheel” was a focus during development.

Still, it’s nice to see throwback touches such as the gear selections laid out in a H-gate style metal lever like Ferraris of yore. Interestingly, the SF90 won’t be limited to a fixed number of units. Instead, production will be decided by the amount the carmaker can sell. On its debut, approximately 2,000 customers are lined up to see it and most have already ordered one. Those that place an order at the preview will have a long wait ahead of them.

Source: Behind The Wheel
Posted in News